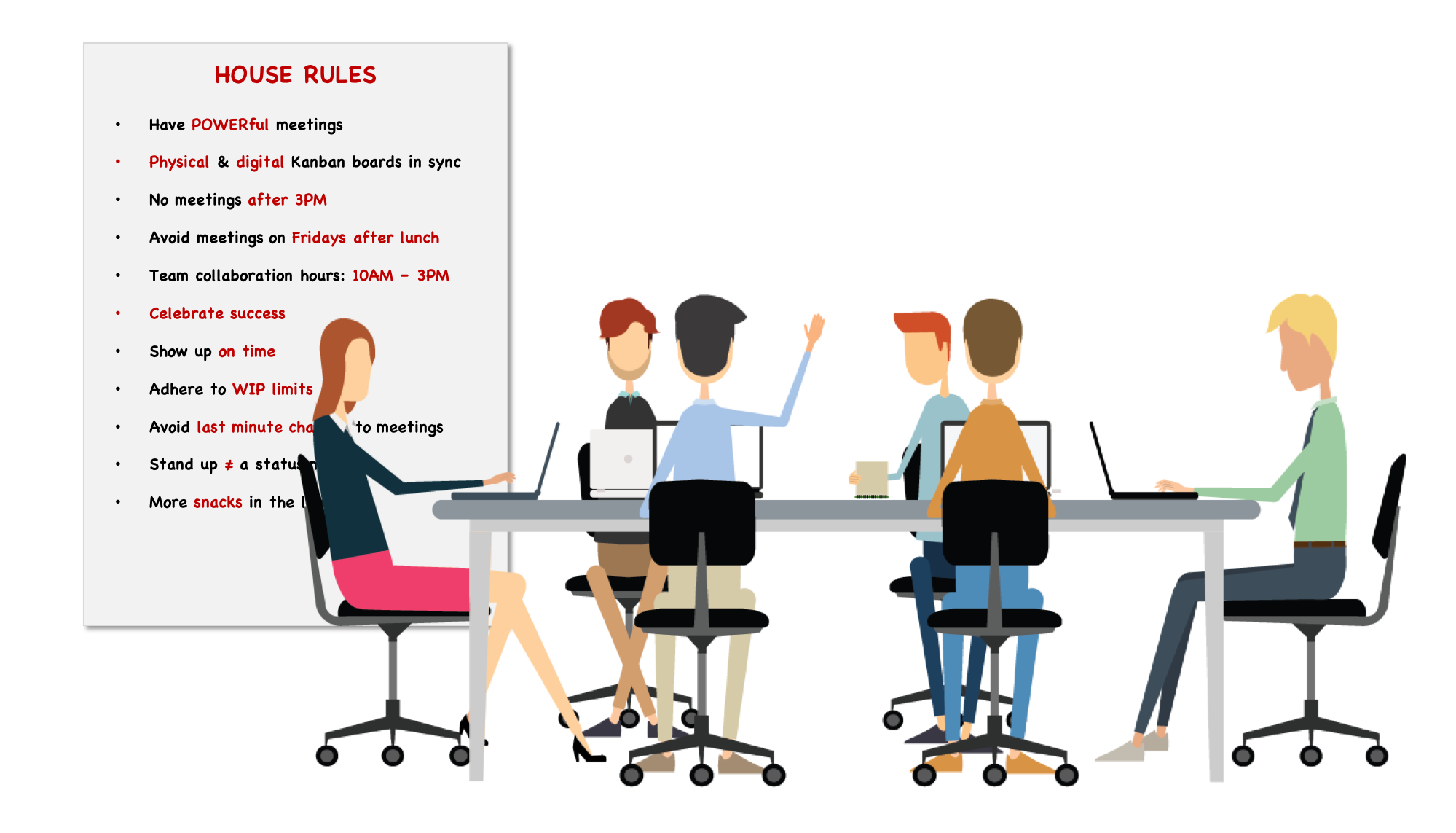 Refining Your Organizing Structure Through Team Collaboration Patterns
next story

How to Run A POWERful Meeting

Often teams experience daily issues that they feel can be improved but don’t feel like they have an outlet to bring it up. How should a team maximize the ability to continuously improve? Here is the story of a team that was experiencing events that they were eager to improve, and here is what they did about it.

During an unfulfilling meeting, one of the lead developers seemed to have had enough with the time-wasting he was feeling. He gathered the team together and started talking about opportunities for the team to improve and encouraged them to add to the list. They called it their ‘House Rules’. The team placed the artifact in a public space in the lab. They later realized that building a physical artifact and putting in a public place resulted in many benefits, including:

Trigger: Certain people simply weren’t contributing to meetings. One reason was that the purpose and the outcomes of these meetings weren’t being clearly articulated. As a result, the team felt that they were having too many meetings and not enough meaningful outcomes. The team agreed to institute POWERful meetings moving forward.

Outcome: The team now feels comfortable calling out if they need to be part of a meeting or not. They align on the purpose and outcome to start the meeting, resulting in fewer meeting invites. This has resulted in an uptick in the teams weekly throughput.

Physical and Digital Kanban Board in Sync

Trigger: The team is made up of onshore and offshore team members so they decided to spin up a digital Kanban board. This board is for everyone to use as a single source of truth for the work. Unexpectedly, one of the onshore buildings was shut down due to maintenance forcing all employees to work from home for an entire week. Luckily the team had been managing their work using the digital kanban. This allowed them to continue to work and collaborate. When they got back to the office, they made it a house rule to always keep it up to date and in-sync to be ready for unexpected events.

Outcome: The team spends a little time each day ensuring their digital and physical boards are in sync. This has allowed for better communication across onshore and offshore teams. The team also has peace of mind in the unexpected event that everyone needs to work away from the office.

No Meetings After 3 PM & Avoid Meetings on Fridays After Lunch

Trigger: The team felt that their most productive meetings happened in the morning, while afternoon meetings were much less productive. One reason for this is that a few team members need to catch shuttles and trains. This keeps their attention on the clock instead of on the details of the meeting.

Outcome: Team meetings are now primarily scheduled right after standup and right after lunch. This allows for the right balance of work versus meeting time during the most productive hours of the day.

Trigger: Due to the location of the organization and the flexible culture, start times varied significantly. The team agreed that between the hours of 10 AM and 3 PM, they should all strive to be in the office and available to collaborate. This allows the team to still work together and also balance their life and work.

Outcome: The team really appreciates the flexibility and overall morale increased. This at times can be hard to measure but is extremely important in the success of any work initiative.

Trigger: The team was noticing bottlenecks forming on their Kanban board decreasing their weekly throughput. They agreed on WIP limits and planned to adhere to them.

Outcome: The team now brings up a breach during standups. They proceed to pivot on their daily plans accordingly. This house rule has allowed them to better manage their work, get more done, and increase their throughput.

Co-creating house rules with your team can be a fun, quick and easy way to begin observing some meaningful change and influence other parts of the organization in an organic way.

Give it a try and let us know how it goes!